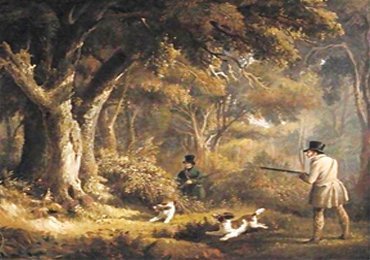 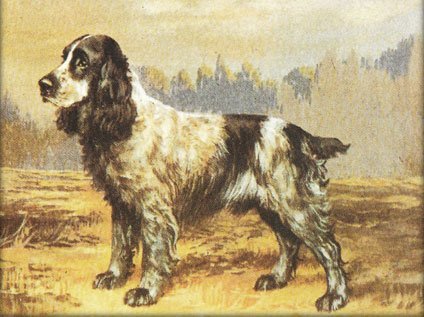 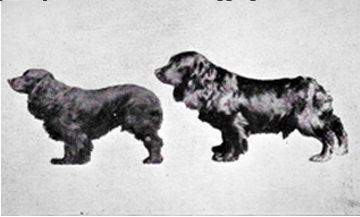 Spaniels as a group have been in existence since at least the 1300s, with most historians tracing their origins to Spain. It was, however, the British who developed the breeds that we know as spaniels in the Sporting group today.

It wasn't until the 1800s that the spaniels were divided into "springing" spaniels and "cocking" or "field" spaniels, with weight, height and hunting style being the notable differentials. The Cocker Spaniel was developed to hunt in dense cover, flushing and retrieving game, primarily woodcock, but larger game birds and even hare were not uncommon quarry. Therefore, the breed needed to be sturdy and robust, capable of bustling through the thick hedgerows and bramble. Not too large to go into and under the brush, nor too small to retrieve the hefty game.
In the early stages of the breed's development, the dogs were much smaller in stature. The tap-root sire Ch. Obo, whelped in 1879, was a mere 10" at the withers, 16" long from withers to set on of tail, and weighed 22 lbs.

By the late 1800s, early 1900s the breed was beginning to stabilize sporting the familiar appearance with length of leg and balanced body proportions. A new era dawned in 1901 when the Spaniel Club abolished the weight limit for Cocker Spaniels, and from that year onwards, steady progress was in evidence. Uniformity in type was starting to be noticeable and breeders began to produce and exhibit sturdy, short-backed cockers, scoring heavily in spring of rib and depth of girth.

The modern-day English Cockers Spaniel is a devoted family companion, as well as hardy sporting dog, eager to work in the field at the side of his master.

The breed excels at performance events such as agility, obedience and any form of nose work, always with the hallmark merry temperament and ever wagging tail.